In one of the most pivotal elections in decades, the United States saw record turnout nationally. With everything from climate change, to racial and social justice, to safe streets and funding for transit on the ballot, we were proud to play a part in supporting the record level of voter turnout.

As the world’s leading provider of shared, electric vehicles, we understand the importance of increasing affordable transportation access on Election Day. In 2016, transportation issues prevented millions of eligible voters from getting to the polls on Election Day. This is why we offered free rides on our fleet of e-bikes for the first time as part of Lime to the Polls in 2020.

The use was particularly high in a handful of cities. In Chicago for example, 32% of all trips taken on Election Day used Lime to the Polls. 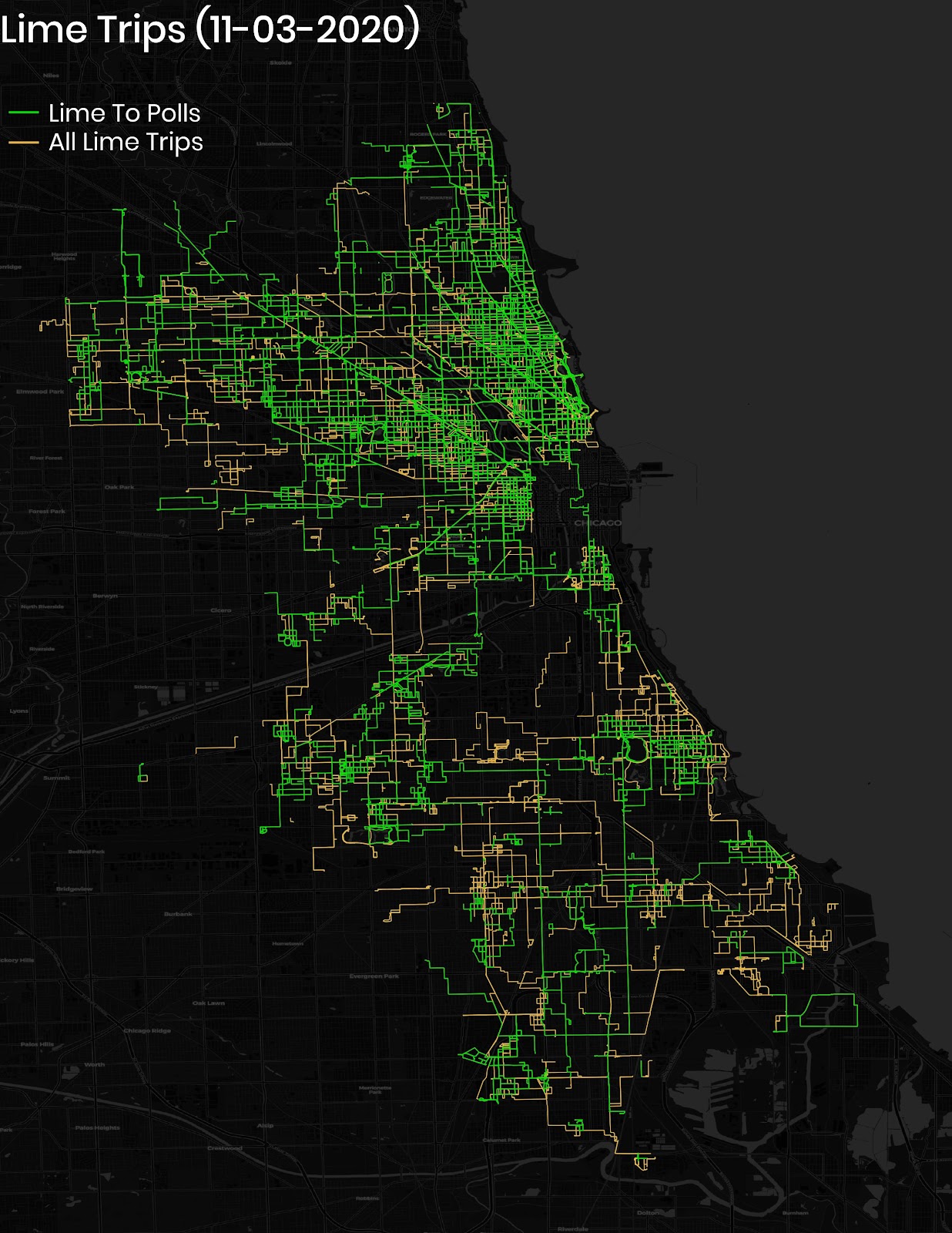 The initiative also accounted for a significant share of total trips in other cities on Election Day, including:

In addition to helping US-based riders get to the polls this year, we also let riders in Austin, Denver and Seattle know about key sustainable transportation initiatives on their ballots this year. We’re excited that all of them passed with strong support.

In Austin, Proposition B passed with two-thirds of the vote and will spur $460 million in city investments in safe streets and cycling infrastructure, including new bike trails, sidewalks, a pedestrian bridge, Vision Zero improvements, safe routes to schools for children and transit enhancements.

In Denver, Proposition 2a, passed with 62% of the vote and will allow for $40 million in annual funding to support renewable energy infrastructure like solar panels, neighborhood-based climate justice initiatives, home and office upgrades to reduce carbon footprints and job creation in renewable and clean energy industries.

And in Seattle, Proposition 1 passed with an overwhelming 80% of the vote, allowing the city to raise $39 million annually to fund transit service in lower-income neighborhoods as well as capital projects to improve service within the STBD.

The investments in renewable energy, environmental justice, safe streets and public transit will make Austin, Denver and Seattle more people-friendly cities and improve the lives of their residents.

We’re also grateful to the many incredible local nonprofit partners who helped to spread the word about Lime to the Polls.  In Louisville, KY, where 34% of trips on Election Day used the promotion, the Louisville Urban League helped to get the message out. We know that transportation barriers disproportionately impact communities of color, making these partnerships particularly important; thirty-eight percent of youth of color said that lacking transportation played a minor or major role in not voting in 2016, compared to 27 percent of young white nonvoters.

We would also like to thank our other friends and partners who helped us increase access to the polls including Safe Mobility Austin, Move Utah, Los Angeles County Bicycle Coalition, Downtown Cleveland Association, Bern Helmets, Civic Alliance, and When We All Vote.

It’s clear that share micromobility can play a significant part in helping voters cast their votes and we’re proud that for the second major election, we were able do our part by providing 100% free trips.

"When We All Vote is on a mission to increase participation in every election by changing the culture around voting and closing race and age voting gaps," said Crystal Carson, Communications Director at When We All Vote. "Lack of transportation keeps far too many eligible voters from casting their ballot. We are proud to partner with Lime to make voting more accessible and break down transportation barriers by providing free, sustainable rides to the polls and helping Lime riders in cities across the country register to vote through the Lime app."

Lime promo codes and free rides are offered in accordance with all applicable laws and regulations, subject to Lime’s terms and conditions, and are not intended to induce, nor is it conditioned on, the act of voting, refraining from voting or voting for or against any particular candidate, political party or measure.

Donate a Bike in Arlington and Get 10 Free Rides!