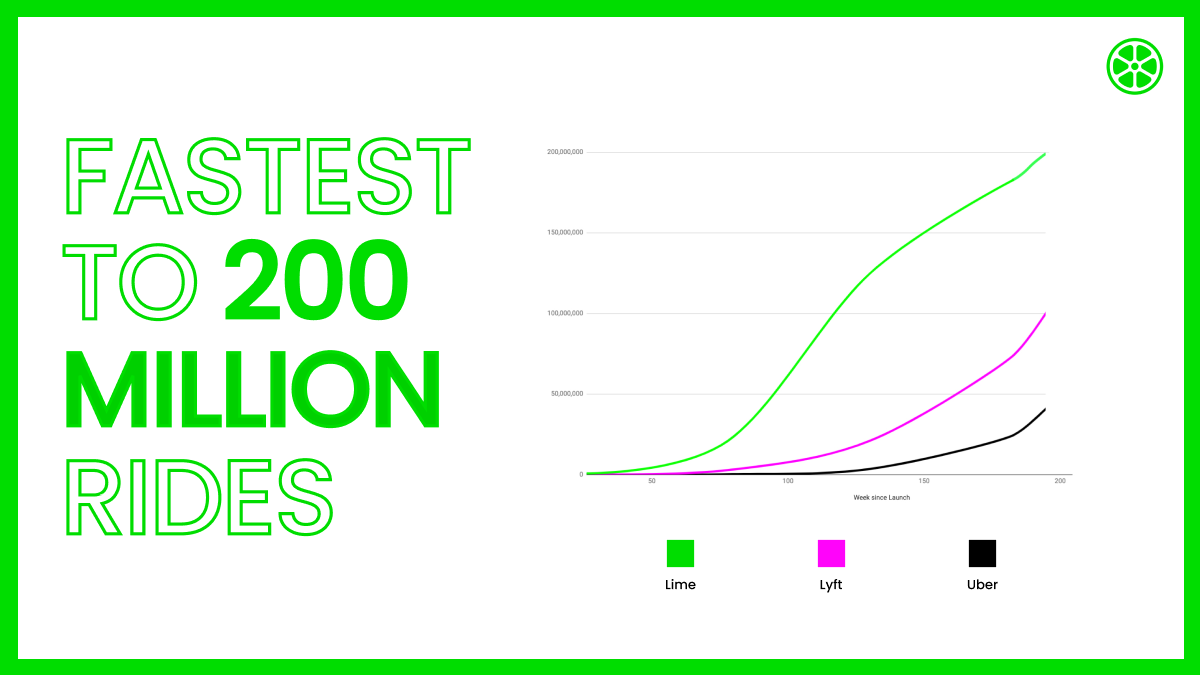 Lime’s latest 100 million trips achieved in half the time as the first 100 million, underscoring sustained rapid growth and making it the world's clear market leader in shared light electric vehicles

We're thrilled to announce that this month, riders surpassed 200 million rides on our vehicles, making Lime the fastest new mobility company to reach this milestone. We're even more excited that the latest 100 million trips were taken in just 13 months, twice as fast as our first 100 million trips, despite a near-total service shutdown at the height of the COVID-19 crisis.

“This milestone is a testament to the undeniable popularity of shared, electric vehicles and the massive amounts of latent demand still to be untapped,” said Wayne Ting, CEO of Lime. “Lime will continue to expand our bike and scooter options to new cities, and innovate on ways to serve all trips under five miles via the Lime Platform. I’m so grateful for the thousands of local Lime team members around the world who made this possible and who will push us forward to the next 200 million trips and beyond.”

We're looking forward to riders taking the next 100 million rides as city residents and visitors increasingly turn to light electric vehicles for safe, socially-distant, open-air travel. The overwhelming demand for alternative transportation in cities is a positive sign for improving quality of life as we work to emerge from the COVID-19 crisis stronger and more resilient. Fewer cars and more light electric vehicles on our roads can do wonders for our health and the health of cities, including cleaner air, less congestion, freer movement of people, goods and services, safer streets and a quieter, more people-oriented neighborhoods.

The impact of 200 million rides isn't lost on us either. It means a substantial impact on replacing car trips and reducing carbon emissions. Lime riders are directly responsible for replacing more than 50 million car trips, while preventing 2.1 million gallons of gas from being burned and 18 thousand metric tons of carbon emissions. For a sense of scale, according to the EPA, it would take a 20,000-acre forest more than a year to capture that much carbon.

We want to thank everyone who made this milestone possible, most of all our riders. Thanks to you making the decision to take a trip on a Lime instead of a car, rideshare or via another mode, you've helped contribute to more sustainable cities, while proving the value of micromobility.

We're ready to keep going, riding forward on the path toward a cleaner, healthier planet, one Lime trip at a time.

Donate a Bike in Arlington and Get 10 Free Rides!